What was the next step after the University of Oregon announced its plans to drop its Div. I wrestling team in July 2007?

There was no debate for retired University of Oregon head wrestling coach Ron Finley. Something needed to be done, and quick.

“Within four days (of being informed of the decision to end the wrestling program), we had the site, SaveOregonWrestling.org, up and running,” said Finley, who continues to serve as the director of Save Oregon Wrestling.

After all, without a website or some other way to inform the wrestling community, how were they going to get their message out?

“From the very start we knew we needed to do something, we needed a way to easily communicate throughout the entire country,” said Finley, adding, “We needed to get our message out.”

Oregon competed one final wrestling season, running out the string during the 2007-08 year. In spite of strong public support for retaining the program, the university and its athletic director at the time, Pat Kilkenny, allowed the Duck wrestling program to join the list of programs which have been dropped.

The battle to reinstate the Oregon program has continued, and with it, the efficient use of the Save Oregon Wrestling website.

Since the start of the site, there has been constant traffic and massive amounts of support across the nation. The response was more than Finley and the Oregon supporters could have hoped for.

The website offers a chance for wrestling fans from Oregon and across the nation to show their support of wrestling at the University of Oregon by signing an on-line petition. The petition states one goal, the reinstatement of varsity wrestling at Oregon.

“The site has kept the country informed of what is going on. Takedown Radio has helped, along with other media outlets. People we don’t even know have either donated or signed the on-line petition,” said Finley. “It really shows people care about wrestling.”

The website continues to encourage people to contact Belotti, Univ. of Oregon President Richard Lariviere and Senior Associate Women’s Athletic Director Rene Baumgartner to encourage them to bring back wrestling.

The Save Oregon Wrestling website says: “Make the decision makers devote time to the problem that they have created each and every day. This cannot be a two-day or week deal. We need to stay on them until they reverse their decision! Wrestling is that important to all of us and America.”

With the funds currently pledged and a solid plan to address the team’s budget issues, Finley cannot help but have faith that the dedicated efforts of the wrestling community over the last few years could lead to a reinstatement.

“We will just have to wait and see how the new AD, Mike Belotti, feels about our efforts and proposed budget,” said Finley.

Finley is quick to praise the efforts of cross-state rival Oregon State, which held an endowment dual meet this past weekend, when they faced nationally ranked Boise State and Wisconsin. A crowd of 3,018 attended the competition, and the meet raised $30,000 which went into the Oregon State wrestling endowment fund.

“Every penny spent on admission to the Oregon State dual meet went to a wrestling endowment fund,” said Finley. “If every program could do that, it would be a step in the right direction.”

While reinstating dropped programs has been a challenge on the Div. I level in the past, Finley and all those involved with the effort believe that there might be light at the end of the tunnel at Oregon.

When asked how long he thought it would take to get Oregon wrestling back on the mat, Finley showed no hesitation.

Oh, and just in case anyone was curious, the petition just received one additional signature. With support from this writer, the total is now up to 7,452.

Appreciate what you have and fight for what you want.

World’s Wrestlers In Olympia To Save Sport 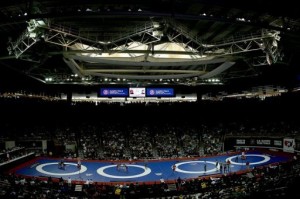