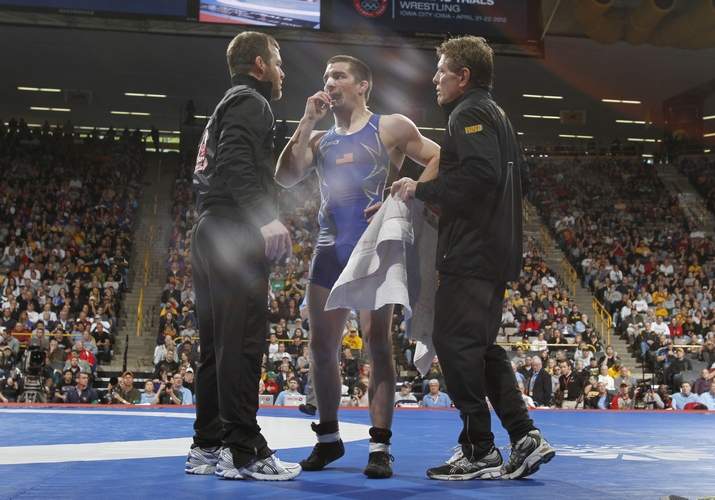 The road to the Summer Olympics for the country’s wrestlers will again go through Iowa City.

USA Wrestling announced Wednesday via social media that the 2016 U.S. Olympic Team Trials will be held at Carver-Hawkeye Arena on April 8-10. The event returns after being held at CHA in 2012.

The announcement was a chance for fans and members of the local community to circle the date on their calendars. The date had to be finalized so the national team could be determined in relation to the international wrestling schedule.

“People around the country and in the Iowa City and Iowa community are going to want the ability to make plans,” USA Wrestling Director of Communications and Special Projects Gary Abbott said. “As soon as the details were established, and we could give a specific date for the Olympic Trials and make a commitment to Iowa City, we wanted to get it out right away.”

The 2012 Trials smashed USA Wrestling attendance records for the event, totaling more than 50,000 total spectators over four sessions of the two-day event. A group of local wrestling leaders and event producers flew to Colorado Springs, Colo., to pitch for the 2012 Trials, contending with other sites. This time their previous results provided all the persuasion they needed.

“Because of the success of the Iowa City event in 2012, USA Wrestling had a continued conversation with Iowa City about the possibility of returning,” Abbott said. “The decision was a decision to continue our working relationship with the people in Iowa City, both the university and the (Iowa City/Coralville Area Convention and Visitors Bureau) and all of the people that were part of making 2012 such a good success.”

The state’s support of the sport and long history of success makes a perfect marriage with the event.

“We’re thrilled this day has arrived,” UI Athletics Director Gary Barta said in a statement. “From the moment the last Olympic Trials left our community, we knew we wanted the event to return. Wrestling fans from around the world experienced the Hawkeye tradition in 2012 and we’re excited and honored to do it again.”

ICCACVB President Josh Schamberger said he was relieved of the official announcement. Bringing the nation’s top amateur wrestling event back to Iowa City was a top priority for him.

“We are very happy,” Schamberger said. “I would feel as if I let down, not just the wrestling friends and program here, if our organization didn’t do everything that we could to help the university land this but I’d feel I’d have let down the whole entire state, being wrestling is such a big deal.”

Schamberger said the local group, that included legendary wrestler and coach Dan Gable, Iowa head coach and Olympic champion Tom Brands, Cornell Coach Mike Duroe and UI’s Les Steenlage, had a vision to create a lasting home for the event here. They did enough to earn another turn.

“I don’t think there was anybody on the local organizing committee that had any hopes that it would go any other place,” Schamberger said. “I’m looking forward to playing our role and putting on a bit of an encore together for 2016 and as soon as that is done, hopefully, we can start on 2020.”

The event made a big economic impact, generating $5.6 million for local communities. It wasn’t contained to the Iowa City and Coralville area. Schamberger said some fans stayed as far away as Cedar Rapids during the event.

“It was substantial,” Schamberger said. “It’s one of the largest amateur sporting events that the Corridor hosts and has hosted. When you have the ability to bring something to this community that does so much good for the wrestling program and the university but also does a lot of good for the town, that is a win-win.”

“If you’re a wrestling fan in Iowa, it’s really kind of like Christmas,” Schamberger said. “We’re going to be really spoiled in 2016. That is just awesome.”