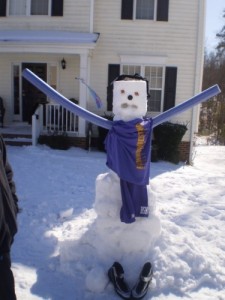 If you’re a wrestler, wrestling family member, friend or fan you can make the most of that white stuff on the ground, beat that feeling of cabin fever, and help raise funds for a worthy cause… all by making a snow angel, thanks to a partnership between Wrestle Against Autism, Pinning Down Autism, and the True Wrestling Insider.

The three wrestling organizations have teamed up to get the word out about autism, and raise funds with a unique take on a traditional outdoor winter activity: making a snow angel… with a twist. Instead of bundling up, wrestlers can show just how tough they are by putting on a singlet (or wrestling shorts and t-shirt) then going outside and making a traditional snow angel. Frostbite shouldn’t be an issue; after all, wrestlers don’t stay on the backs for long, however, be safe.

Have a friend or family member record a video of your snow angel-making, post the video on Facebook, Twitter and your other social media websites, then challenge three friends to take the snow angel challenge. If they do it, you donate $5; if you’re not able to get them to join in, you have to donate $50. Proceeds go to Wrestle Against Autism and Pinning Down Autism. Dollar amounts are suggested, but give what you can.

For wrestlers who live somewhere that doesn’t have snow, you can come up with your own challenge for you and your friends. Any other fun-but-challenging activity that shows just how tough wrestlers are.

To make the challenge even more fun – and more beneficial to these charities — True Wrestling Insider is offering an additional $100 donation in the winner’s name for the wrestler who comes up with the most creative and fun video. Participants are encouraged to use their imaginations… but keep the videos brief; ideally, less than four minutes. Judging the videos will be Cheryl Harvey of PDA and Jeff Sitler of WAA.

Wrestlers and their supporters who’d rather not make a snow angel can still make a difference by making a donation directly to these autism charities. To donate directly to Wrestle Against Autism, send your gift to The Richardson Foundation, P.O. Box 341592, Dayton, OH 45434 USA. Please make the check payable to the Richardson Foundation, and write Wrestle Against Autism on the memo line.